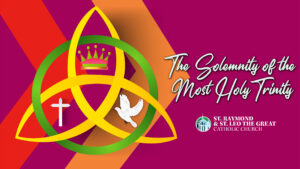 The first two chapters of Luke’s Gospel alternate between
stories of two births. One is the annunciation and birth of
John the Baptist, who was, for Luke, the last great prophet
of the Old Testament and who prepared the way for someone
greater than any prophet—Jesus the Messiah. The annunciation
and birth of Jesus is the other story. The story of
John sets the very Jewish environment into which Jesus and
John were born. Jesus’ annunciation and birth begins to
move the Gospel into the environment of the Roman empire.

In the verses before those read today, the birth of John the
Baptist has been announced by the angel Gabriel to Zechariah,
who was performing his duties as a priest in the Jerusalem
Temple. Gabriel then announced the birth of Jesus to
Mary in her home in Nazareth. Zechariah and his wife,
Elizabeth is an old couple who has never had children.
Mary is engaged to Joseph, but they have not yet come to
live together.